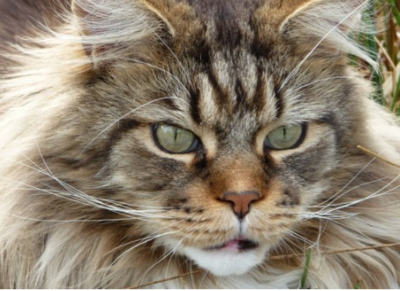 The Debated Origins
The Maine Coon is one of the oldest feline breeds in North America. There are numerous myths and legends surrounding its origins. A widespread belief is that the Maine Coon had its start in a mating between a semi-feral domestic cat and a raccoon. This is biologically impossible, but would explain the big, bushy tail and the common brown raccoon-like coloration. Originally only cats with the brown tabby coloration were considered to be Maine Coons. Cats with all other colorations were labeled Maine Shags.

Most breeders today believe that the Maine Coon is a result of clandestine meetings between pre-existing domestic shorthairs and exotic longhair breeds that were introduced by New England seamen or possibly even the Vikings. The breed we know today most likely evolved through the wonders of natural selection, becoming a cat that could survive and thrive in the frigid and unforgiving Maine climate of many hundreds of years ago. It became a tough, rugged, intelligent cat that has only recently been manipulated through planned breeding.

Black and white ‘Captain Jenks of the Horse Marines’ was the first recorded Maine Coon in 1861. They were popular cats for showing in Boston and New York in the mid to late 1800’s. When the Persians arrived on the show scene in 1900, the Coons fell out of favor. Although they remained well-loved in New England, they didn’t show up in numbers on the show circuit again until the 1950’s. They have remained popular ever since.

Let’s Talk a Lot About Hair
The Maine Coon is a poster child for a breed that evolved in a harsh winter climate. Its coat and its sheer size are possibly its most telling characteristics. Hair length is shorter on the head and shoulders (possibly to keep the cat from becoming entangled in underbrush), and longer on the stomach and flanks. The belly hair resists becoming a matted, frozen or soggy mess and this allows the cat to stay well insulated from the cold. A classic characteristic of the breed is the ruff about their chest which makes them look somewhat lion-like.

The hair itself is divided into the topcoat and undercoat. The hairs of the topcoat tend to be slick with a full cuticle. These hairs may feel kind of “hard”. This type of hair repels snow and water, keeping the undercoat relatively dry. The undercoat hair is fine, soft and straight, very dense and close-lying. This gives support to the topcoat and keeps it from matting next to the body. The overall effect is a big, bushy, and weather-resistant.

The Maine Coon also wears pantaloons (long hair on the backs of their legs) and ear muffs (well-furred ears). The wide-based ears are larger than most cats, situated at the top of the head, furred inside and out, and may be topped with tufts of fur – although this is not always seen. When present, the tufts give the cat a lynx-like appearance. Quite a bit of extra fluff is also found between their toes, creating a snowshoe effect (and adding insulation).

They also have a very long, bushy tail. The tail is often as long as the body itself. The fluffiness allows the tail to lie on top of the snow and not sink into it. It can be curled around their face and shoulders for warmth and protection from the weather. It also aids the cat in a rudder-like fashion, to help it maneuver at a rapid pace.

All of this extra hair gives the breed much more mass without adding weight – useful when you’re barreling around on top of snow pack (a stocky short-haired cat, on the other hand, would sink like a rock). You would think that all of this hair would be a nightmare for Coon owners – but a weekly brushing is usually sufficient and most Maine Coons take care of themselves surprisingly well.

Size and Coloration
The Maine Coon is a big, long cat. Males are typically 13-20 lbs. and females 9-12 lbs. They are heavy boned with long legs, although their legs don’t look particularly long compared to their own very long bodies. Tales of giant Maine Coons of 25 lbs. or more are usually due to obesity. But comparatively, it IS a large breed. They mature slowly and full-size is usually not achieved until 3 or 4 years of age.

Maine Coons come in almost all colorations with a few exceptions. Chocolate, lavender, ticked tabby and point restricted patterns (like a Siamese) usually indicate hybridization. Eye color varies widely. Green, green-gold, and gold may be found with all coat colorations. Blue eyes and odd eyes may be found in white coated cats. The most common coloration is brown with tabby markings, including the ringed tail and characteristic ‘M’ on the forehead.

Broad, angular heads and squared off muzzles complete the picture. The Maine Coon is most similar to the Norwegian Forest Cat in appearance. Most likely this similarity is not due to interbreeding – but evolution in similar climate and terrain.

Personality, Personality...
The Maine Coon is an energetic, playful, easy-going, take-it-as-it-comes cat. Very fond of its owners, it wants to be there to ‘help’ you with all of your chores. It’s the kind of cat that waits by the door when you’re in the bathroom. It’s typically not a lap cat, although it will happily sit next to you. Maine Coons are not pestering, overly dependent cats. They like to be involved in your activities, but do not need to be babied. They are a good choice for active families with other animals and kids.

Maine Coons are known for their intelligence and dexterity. They are not as vertically oriented as other breeds and usually stay lower to the ground. They have a tendency to use their front paws a lot and may become quite good at opening cabinet doors, turning doorknobs, and turning on water faucets. They also may become quite adept at curling their paws around objects to pick them up and they may use their paws to eat instead of eating straight from their bowl. As a side note, they are known for rarely eating alone and prefer to eat in the company of other animals or humans (they usually enjoy having dogs and other animals around).

Their high intelligence makes them one of the most trainable cat breeds. They will often play fetch. They can also be very mischievous when bored. Some Maine Coons enjoy playing with water, dipping their toys and paws into water as a playtime activity. This does not mean they enjoy baths!

Their voice is tiny for their size. They produce a distinctive, chirping trill (like a cross between a purr and a meow) that typically emerges when they’re happy or startled. They rarely out-and-out meow.

Medical Issues
In the Maine Coon, the most common hereditary health problems are hip dysplasia and feline hypertrophic cardiomyopathy. In severe cases, hip dysplasia can produce lameness. Depending on severity, cardiomyopathy can cause a minor heart murmur to severe heart diseasere. Any reputable breeder should be willing to discuss the history of disease in their breeding stock or in the litters they’ve produced. Reputable breeders should also be able to show evidence of screening for congenital disease as well.

Overall, the Maine Coon is a hardy, intelligent and loyal breed – worthy of being one of the most popular cat breeds in the world today.


For general information, questions, appointment requests, call us at:


We're available for dog and cat boarding. Call us for more information.