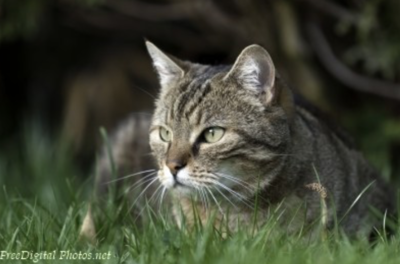 What is Toxoplasmosis?
Toxoplasmosis is a disease syndrome caused by an organism called Toxoplasma gondii. It affects most mammals, including cats and humans. Acute Toxoplasma infection in a human may cause fever, swollen lymph nodes, muscle stiffness, joint pain, and a sore upper abdomen. These symptoms may also be so mild that they go unnoticed and are dismissed as a bad cold.

But here’s why you may have heard of Toxoplasmosis: if a pregnant woman is infected, the organism may cross the placenta. Depending on the stage of pregnancy at the time of infection, results may include varying degrees of blindness, severe neurological conditions, and even miscarriage or stillbirth. Sometimes these problems will not show up until later in life.

Fortunately, only 30 to 40% of infections in pregnant women result in damage to the fetus. A person previously infected is unlikely to get sick again or transmit the organism to an unborn child. It is estimated that as much as 1/3 of the US population has already had Toxoplasmosis.

But I can catch it from my cat?
Yes. There are two basic forms of Toxoplasma that cause a risk to humans. One is shed in the feces of an infected cat. The other lives in the tissues of food animals such as pigs and lambs. A person inadvertently ingesting either of these forms of Toxoplasma may become infected. Raw goat milk is also an important source of infection. Cats become infected by eating infected meat as part of a raw meat diet, or by eating infected prey animals.

It is possible to get Toxoplasmosis from cats, but no direct correlation has been found between cat ownership and Toxoplasma infection. Infected cats shed the organism in their feces for only a few days in their entire life so the chance of human exposure is small. The Toxoplasma form that is shed in the feces of a cat needs 24-48 hours to grow into a dangerous form...so if you’re good about scooping their litter daily you’ve largely eliminated that risk. Since cats don’t usually carry the parasite on their fur, it is unlikely that you would be exposed to the parasite by touching an infected cat (assuming you are good about washing your hands!). Indoor cats that do not hunt prey and are not fed raw meat are unlikely to be infected with Toxoplasma. Thus the cat has for the most part been over-emphasized as a carrier of Toxoplasma. The majority of human infection in the US results from eating Toxoplasma in undercooked meat. Still, it’s always better to be safe than sorry...


For general information, questions, appointment requests, call us at:


We're available for dog and cat boarding. Call us for more information.